After reading Exposing the Turnkey Tyranny I went down a rabbit hole for a minute, and share this:

The sooner the state is smaller the better to deflate “the nation-state, now play[ing] fund-raiser for a new-brand power-concentrate.” …and we thought nation-state were a bad idea

The government has granted itself power it is not entitled to. There is no public oversight. The result is people like myself have the latitude to go further than they are allowed to … My sole motive is to inform the public as to that which is done in their name and that which is done against them.” And that which the public pays for, or rather is robbed of through taxes. The smaller the beast, the less our burdens, and the risk of damage from a release of that beast. Edward Snowden 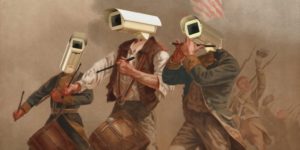 In essence, a republic is supposed to be a model for government that avoids being both both democracy and monarchy, and allegedly replaces the administration of men over men with the administration of the law itself over men. In a republic, the law is supposed to restrain the lay public from creating tyranny of the majority (I.E. a democracy) and simultaneously restrain the institutional agents of the state from functioning as an elite of rulers imposing their will on the lay public (I.E. an oligarchy).   But a basic understanding of how human beings work and a rational analysis of how the state functions as an institution, including so-called republics, renders this theory of government as a rather blatant absurdity. How can a law be self-enforcing? By definition, a governmental law is drafted by men and must be enforced by men. No political system can escape the rule of men, for all political systems are created and run by men. At the same time, no political system is the result of the decisions of everyone within a society, for at a fundamental level all political systems are oligarchies in which a small percentage of the overall population are those with direct control over the state apparatus, those who actually make and enforce the laws. Brainpolice

We can hold the republic accountable, but why not ignore it’s legitimacy, stop paying for it, voting for it, and giving it legitimacy to begin with? Well, the book will be thrown at us, and we may end up on the bad side of being the slaves we already are. No master sovereign is better than a nice one, or a funded one. Many people have blown this whistle against this self-imposed legitimacy that should have no clothes, nor a leg to stand on to begin with, but we provide them by buying in, which is nearly impossible to escape unless we all walked away or scoffed at its legitimacy in disbelief.

Exclusive: Meet the Pentagon Official Who Blew the Whistle on Mistreatment of Other Whistleblowers