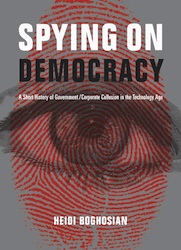 I recently heard Heidi Boghosian on WBAI and was not surprised to hear what I did in regards to Democracy and spying. She wrote a book to document the phenomenon: http://en.wikipedia.org/wiki/Spying_on_Democracy.

It’s not surprising that the power elite want to maintain their hegemony and thwart democracy. I pointed out many problems with democracy here. Nevertheless, if we followed Thomas Jefferson’s democracy to its logical end we would indeed have anarchism, as to follow Locke’s consent theory leads to just that. A Republic was born to maintain hegemony, and it has done that relatively well, and now better or darker with the deep state or shadow government being backed by capital’s interests.

The original use of the word “Panopticon” (all observe) comes from social theorist Jeremy Bentham, who designed a prison with a central watchtower,

no doubt inspired by his views on society and ethics. Ironically, the word is actually “all observe,” not “observe all” as that’s what Bentham intended. The design was used and popularized as a metaphor by Michel Foucault, in Discipline and Punish, to mean a form of power or hierarchy via observation and normalization. Emma Goldman, before Foucault’s time, summed up the idea nicely: “The most unpardonable sin in society is independence of thought.” Of course the gravity of your social “sin” depends on who your company is, and what your thoughts and actions are.

I am pretty sure Naomi Klein wrote the panopticon article below. It was posted almost a year after it was downloaded from the web (back in 2003?). The author’s name was lost and we can’t locate it with any search engines. If I remember correctly it is Klein– the content and language are definitely reminiscent of her work.

Indeed, not only is it feasible to suggest that there are ways out of the carceral archipelago, I would also like to suggest that the Panopticon can be inverted or perhaps subverted in order to provide a model for the ‘reacting-back’ of individuals against the institutions which seek to bind and control them.

What follows below is something of a ‘thought-experiment’: I am not claiming to offer a definitive view of the modus operandii of the new social movements, but rather want to suggest a possible model which demands further testing and empirical research to ascertain its viability as a metaphor. 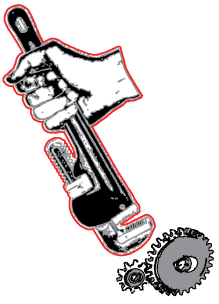 So, let me begin this thought experiment by positing that there is a ‘domain’ of society – roughly speaking, a ‘public sphere’ – which in fact observes institutions themselves and scrutinizes them – albeit naively and idly – for infractions of the more basic human rights or standards of decency and accountability. This public sphere is ‘naive’ because it has no particular knowledge of the internal workings and dealings of corporations and/or nation-states: it is, for example, not trivial for Joe or Jane Public to know which factories Nike has contracted out to manufacture its shoes, and whether these factories adhere to basic labour standards. But if Joe or Jane were to be reliably informed that Nike were utilising Chinese sweatshops with no regard whatsoever for human rights, Nike risks going the way of Kathie Lee Gifford unless it can be extraordinarily light on its feet and charming in its PR. In short: the public gaze – properly directed – carries a great deal of weight.

But how can this gaze be directed? How can we ‘model’ the relations which uncover abuses of corporate trust and ‘focus’ public attention upon the transgressors? Perhaps the answer lies in not a rejection of Foucault’s metaphor, but rather an inversion of the power relations it entails: an ‘inverted Panopticon’, in which the power relations of domination and exploitation which are present in everyday life are turned on their head by the actions of activists [see fig.1]. fig.1 – the ‘Inverted’ Panopticon

Now, instead of institutions (be they states, corporations or any other dominant organisation) acting as the observers inside the tower, they instead can be pictured as the prisoners: not trapped physically, but symbolically by their brand, their public image. Of course, anyone can see into these cells from the outside – from the public sphere – into the cell, and see the presenting his outward image: smiling and open-armed, inviting them to peruse every inch of his or her cell. But, of course, the public’s vision is blocked by the prisoner’s very presence: he or she can stand in such a way as to obscure any less salubrious part of his/her cell: the public image is never the whole story. In fact, the only way to outmanoeuvre the prisoner – to see the whole picture of his/her doings – is to gain access to the tower behind the cell. From the tower, the prisoner no longer blocks the view: the angle has changed. And, indeed, by using his/her specialised skills (be they hacking, ‘culture jamming’, or defacing a corporate website), the activist can use various lines of flight – essentially lines of information passage, such as corporate network gateways – to gain access to the tower and, perhaps just for a split second, see the full picture: what is hidden from the view presented to the public.

Thus, once again, the operation of the inverted Panopticon is all a question of the control of vision and the positioning of bodies. The framework of Foucault’s metaphor holds good in reverse: all the thought experiment does is to turn the power/knowledge apparatus on its head and ask ‘what if…’. Control of the Panopticon is not inherently the privilege of a particular social group: with the right skills, the right knowledge, the functioning of the concept can be turned against those for whom it was originally designed, bringing discipline through surveillance – manifested as transparency through accountability – back into the institutions who would seek to impose its operations upon us.

…The two contrasting modes of punishing are snapshots drawn from the two types of what Foucault terms ‘technologies of punishment’. The first, the ‘monarchical’ technology of punishment involves the repression of the populace through brutal public executions and torture. The second, ‘disciplinary punishment’ – which according to Foucault is the form of punishment practised today – gives ‘professionals’ (psychologists, program facilitators, parole officers, etc.) power over the prisoner in the sense that the prisoner’s length of stay depends on the opinion of these professionals. Foucault compares modern society with Jeremy Bentham’s (unrealised in its original form, but nonetheless influential) “Panopticon” design for prisons, in which a single guard can watch over many prisoners while themselves remaining unseen. The dark dungeon of pre-modernity has become replaced with the bright modern prison, but Foucault cautions that “visibility is a trap” – it is through this optics of seeing that modern society exercises its controlling systems of power-knowledge. In this way, Foucault suggests that there is something that connects the maximum security prison with our everyday working and domestic lives, namely the (witting or unwitting) supervision (surveillance, application of norms of acceptable behaviour) of some humans by others. There is a ‘carceral continuum’ stretching from the prison, through to secure accommodation, to probation, social workers, the police, teachers… and us ourselves. (Michel Foucault, Discipline and Punish: The Birth of the Prison, source)

Lucy Dalglish, Executive Director of the Reporters Committee for Freedom of the Press, discuss possible prosecution of reporters in the NSA leaks and Senior Legal Analyst Norman Goldman on the 1917 Espionage Act. link

I’ve often thought the key to freedom is to “reverse the panopticon” of spying as I wrote some time ago: