Edward Abbey was an anarchist, of sorts, but he was far from a saint, or smart, if not a blind hypocrite when it came to the size of his environmental footprint as he chose to have 5 kids (not to mention 5 different wives). Once you pass replacing yourself in this day and age, I have to point and think, “you selfish bastard,” and in Abbey’s case, “what kind of environmentalist are you?” Abbey also seemed to have something against vegetarians and vegans. Perhaps because they are right, and he was wrong when it comes to food choices.

The facts above, and this little bit of Abbey stupidity set me off, to being put off from almost anything Abbey:

One final paragraph of advice: […] It is not enough to fight for the land; it is even more important to enjoy it. While you can. While it’s still here. So get out there and hunt and fish and mess around with your friends, ramble out yonder and explore the forests, climb the mountains, bag the peaks, run the rivers, breathe deep of that yet sweet and lucid air, sit quietly for a while and contemplate the precious stillness, the lovely, mysterious, and awesome space. Enjoy yourselves, keep your brain in your head and your head firmly attached to the body, the body active and alive, and I promise you this much; I promise you this one sweet victory over our enemies, over those desk-bound men and women with their hearts in a safe deposit box, and their eyes hypnotized by desk calculators. I promise you this; You will outlive the bastards. (From a speech to environmentalists in Missoula, Montana, and in Colorado, which was published in High Country News, (24 September 1976), under the title “Joy, Shipmates, Joy!”, as quoted in Saving Nature’s Legacy : Protecting and Restoring Biodiversity (1994) by Reed F. Noss, Allen Y. Cooperrider, and Rodger Schlickeisen, p. 338.)

The words above were printed on a wipe board (and are in his wiki entry, surprise), to which I responded in kind: “Except  those you kill in a half-hearted fun mess you bastard.” Not much else to say, Abbey was dumb, and/or blind, not to mention against all the people doing what they can for the environment via desk job tasks. If this is his “final paragraph of advice,” my advice is that there are better people to take advice from, especially given just how off-base his advice happens to be. This planet could only support about 135 million hunter-gather paleo “primitivist” types. Maybe that’s good, but I like to think of technology as a means to continue our evolution and freedom, not just a potential way to ruin the planet, and ourselves. 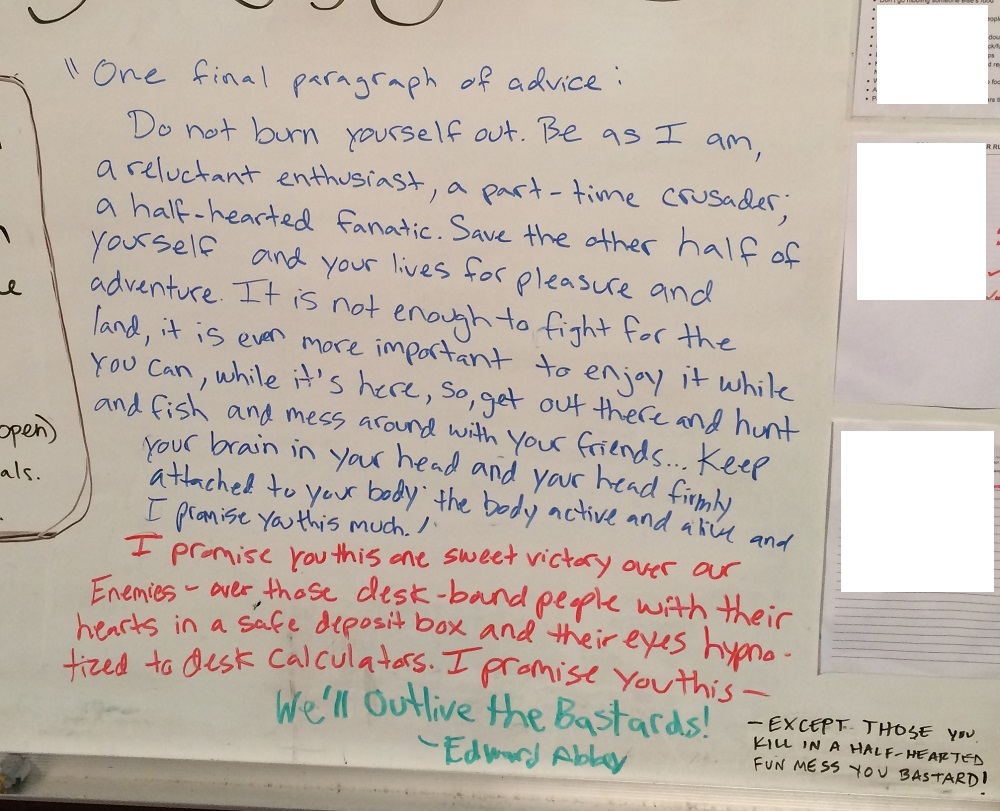 Here is another gem:

The plow has probably done more harm- in the long run-  than the sword. E Abbey

I’ll add penises, vaginas, and poor planning to this as well Edward, and would guess the damage of breeding is far worse, and perhaps the impetus for the plow and fence to begin with.

I’ll side with Abbey and say agriculture might be evil (at times), but plant ag is less evil than animal ag, and both have afforded homo sapiens like Abbey, and myself, the luxury and time to sit at desks and type, what bastards…though I’m less of one because I have no children, and I’m vegan. His mouth was apparently behind a typewriter, not action, nor logic.

The real work of men was hunting meat. The invention of agriculture was a giant step in the wrong direction, leading to serfdom, cities, and empire. E Abbey

Above is another example of Abbey’s stupidity, and perhaps patriarchal bullshit. Is farming work less “real” than killing and/or gathering? Serfdom, by the way, was due to people accepting the logic of those that took advantage of people by instilling in them the idea that they are similar to prey items, and should be led by leaders as well, both wrong directions set in motion by a wrong direction of killing and barbarity to begin with. What’s wrong with cities? I suppose sprawl is better Edward? Going up, rather than out makes sense, but of course that would be for people that put their money where there mouth is again. And empire…in a crude way, we can thank the work of real men hunting meat, money, and serfs gullible enough to let any bad logic, including musings like Abbey’s, to slip by and escape without being killed.

Life is too short for grief. Or regret. Or bullshit. E Abbey

Wait, isn’t much of what Abbey “did” related to complaining in regret of the bullshit and grief from the regret of our evolution? From what I can tell, he was full of bullshit himself. If you go near his burial site and inhale real hard, you might just smell the bullshit stench and find his unmarked grave (to piss on).

Better a cruel truth than a comfortable delusion. E Abbey

Abbey is relatively new to me, and from what I can tell, I’m not interested in pursuing his writings much further, given his life choices, words, and these: Ecology’s Family Feud : Murray Bookchin Turns Up Volume on a Noisy Debate, and Murray Bookchin and Dave Foreman Defending the Earth: A Debate.