What kind of libertarian are you?

The word “libertarian” has an interesting etymology. Today, it has become associated with its recent American interpretation; “libertarianism” denotes the limiting of state functions to defence of the nation and of individual legal and property rights. All other functions besides, or in some cases including, these ones are left to the “free-market” to provide.

Superficially (extremely superficially, it turns out) this position might resemble a classical liberal thesis such as Wilhelm Von Humboldt’s book On the Limits of State Action. This kind of “libertarian” is presumed in diametric opposition to a “communist” who (also under the American definition of the word)  would advocate the performance of all functions via a state bureaucracy. Using such definitions, “libertarian communism” would be regarded as a semantical absurdity

Such American definitions of these words have little historical basis. The word “libertarian” was first coined by the French anarchist Joseph Déjacque, in an 1857 letter The Human Being, in which he takes P.J. Proudhon to task for his sexism:

“Moderate anarchist, liberal, but not libertarian, you want free exchange of cotton and candles and you seek to protect man against woman in the exchange of affectional human passion”.

Libertarian was later used as the title of his anarchist journal La Libertaire, published in New York between 1858 and 1861. This originator of the term “libertarian” in fact called himself a “libertarian communist”. So did the famous anarchist Peter Kropotkin, many decades before American “libertarians” like Murray Rothbard appropriated a socialist word to denote their own “free-market” philosophies.

In fact, self-identifying European libertarians of the 19th century would be bitterly opposed to much of what passes itself off as “libertarianism” today. Their “libertarian communism” was anti-capitalist to its core, rejecting the notions of private property and capital accumulation. In contrast to the “state communism” of the Marxists, they advocated the communal ownership and co-ordination of means of production organically, by autonomous, federated communes rather than via the state machinery of a “vanguard party”.

To try and understand this perverse re-definition of the word “libertarian” I return to Humboldt’s Limits of State Action, a book some modern-day libertarians might be fairly accused of having read by title alone. State action is to be limited to national defence and upholding the law, Humboldt concludes. But why does he reach this conclusion? For Humboldt, society is to be constituted so as to make people free:

“Whatever does not spring from a man’s free choice, or is only the result of instruction and guidance, does not enter into his very being, but remains alien to his true nature; he does not perform it with truly human energies, but merely with mechanical exactness…”

This is why the interference of the state in people’s affairs should be strictly limited. In Humboldt’s day the State was the main wielder of concentrated power. When people act only in response to dictates issued by those higher in a state chain of command, they are not acting as free human beings. Humboldt is preoccupied with state power and not overly concerned with private power, as he considers private persons roughly equal in power, whereas the institution of state makes possible a vast concentration of power not amassable by individuals. Here is a relevant quotation:

“Should it be objected to these assertions that it appears somewhat strange to deny to the State a privilege which is accorded to every individual, viz. to propose rewards, to extend loans, to be a land-owner, the objection might be fairly entertained if it were possible for the State to consist of a double personality in practice, as it does in theory. In such a case it would be the same as if a private individual had secured to himself a vast amount of influence. But when we reflect (still keeping theory clear from practice) that the influence of a private person is liable to diminution and decay, from competition, dissipation of fortune, nay even death; and that clearly none of these contingencies can be applied to the State; there still remains the unassailable principle that the latter is not to meddle in anything which does not refer exclusively to security,—a principle whose force of apposition is enhanced in that it has not been supported by arguments derived from the very nature of coercion itself.

A private person, moreover, acts from other motives than the State. If an individual citizen proposes premiums, which I will agree to suppose are as efficient inducements as those of the State (although this is never perhaps the case), he does so for some interest of his own. Now, from his continual intercourse with his fellow-citizens, and the equality of his condition with theirs, his interest must be closely connected with their advantage or disadvantage, and hence with the circumstances of their respective positions”. [my emphasis]

Humboldt is saying here that it is not necessary to concern oneself overly with limiting the power of private persons, since “the influence of a private person is liable to diminution and decay, from competition, dissipation of fortune, nay even death“. Today’s trans-national corporations, as immortal “persons” in law, do not suffer these disadvantages and have thus succeeded in amassing fortunes equivalent to those of entire nations. Such a corporate “person” does not experience “equality of his condition” with flesh-and-blood persons, so “his” interest is not “closely connected with their advantages and disadvantages”. Humboldt’s “contingencies”, which could not be applied to the State of his time, cannot be applied to the trans-national corporation of ours. As such, if Humboldt were writing today and were at all consistent, I think he would strongly advocate the limiting of corporate power, unlike many of today’s self-declared “libertarians”. 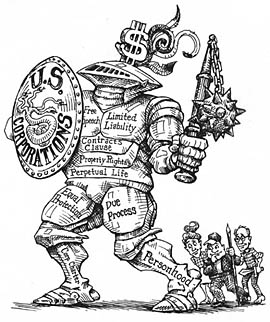 For today’s “libertarian” to simply take conclusions of classical liberalism (such as the limiting of state power) out of all historical context, ignoring the arguments leading up to them, is in my view an unforgivable intellectual distortion. To advocate the abolition of state functions whilst leaving today’s corporate “free” market system in place is to demand that people submit themselves to the “instruction and guidance” of corporate managers, while simultaneously rolling back any guarantee to basic human rights such as food, healthcare and education. One could regard much of today’s “libertarian” movement as a cynical attempt by corporate propagandists to manufacture an ideology under which people are persuaded to take actions systematically undermining the very institutions guaranteeing them some baseline standard of social support, all in order to further increase corporate profits. Or as the anarchist and monetary reformer Silvio Gesell put it in his book The Natural Economic Order:

Any person today identifying with the label “libertarian”, with the notion of individual freedom, needs to ask the question “freedom from what?” Freedom from government “interference” is a contextual freedom. Perhaps the state is a cage, but while savage corporate beasts roam free, a cage is necessary protection. Those who ultimately seek the elimination of the cage must seek first the elimination of the beasts. Those who seek instead to dissolve the bars of the cage whist further strengthening the beasts have no right to claim the socialist’s word “libertarian” as their own.